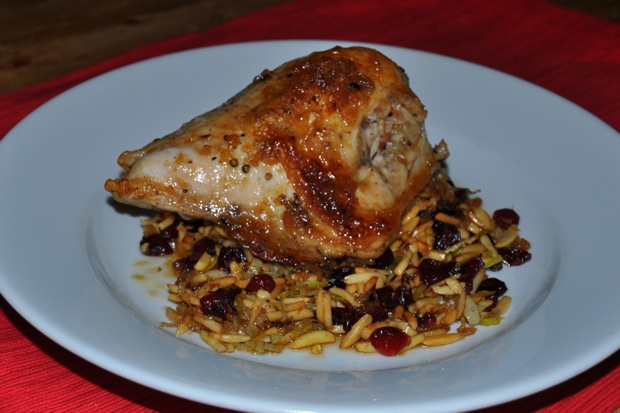 At long last-and by popular demand-we are back, and this is the mouthwatering dish that inspired us to write again!

So come with me in the Way Back Machine to the year 1998, mid-May to be more precise. It was a little less than a month after our littlest munchkin had been born, and Dave whisked me off to NYC for a short respite to celebrate my birthday. The day before my actual birthday was particularly memorable for three reasons: Frank Sinatra died, the finale of “Seinfeld” aired, and we had the spring tasting menu at Lespinasse.

Chef Gray Kunz was still cooking at the restaurant, which was in the St. Regis Hotel. I remember exactly what I ate and drank-not only because the meal was so exquisite and paired with Joseph Phelps wines-but also because I believe it was the first menu from an American restaurant that we deemed worthy enough to land on our menu Wall of Fame. Here it is, autographed by the chef: 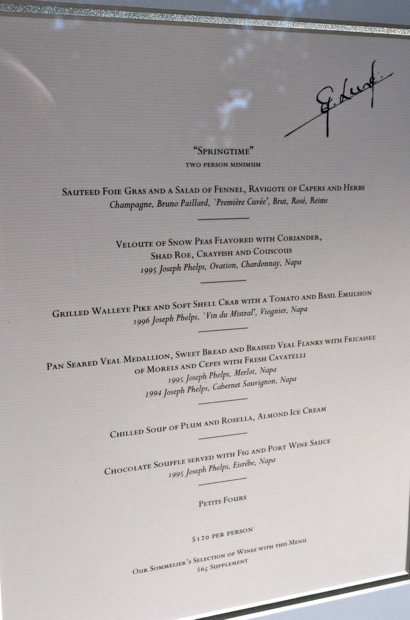 (Ohhhhh…that snow pea veloutè was a thing of ecstatic rapture!)

Anyway, we became instant Gray Kunz fans, and have lamented his absence on the NY food scene since Cafè Gray closed its doors in 2008 (and Hong Kong, where he’s cooking now, is a bit far for us to schlep for dinner!). When his cookbook, The Elements of Taste, came out in 2001, I carried the beautiful tome with me everywhere, peering inside when I had a few free minutes in the waiting room at the dentist’s office or parked in the pickup line at preschool.

Despite the complexity of the chef’s dishes at his restaurants, the recipes in the book are fairly simple and straightforward. The first one I attempted was this Oven-Crisped Chicken with Maple Vinegar Sauce, and it’s the one that I do over and over and never get tired of. David swoons when I make it. I’ve served it for dinner parties, and had people virtually licking their plates. I couldn’t wait til my picky eaters expanded their culinary repertoire beyond chicken nuggets, pasta with butter (and nothing green on top!), and hotdogs, so I could share this masterpiece with them-and thankfully the time has come.

The recipe calls for a whole chicken, but we have a house full of chicken lovers who leave the legs (and often the thighs) for dead, so I used a dozen bone-in, skin-on breasts last night. While the chicken is roasting, you make the “topping” (which is funny, because I serve it on the bottom, but more about that in a moment) and the maple vinegar sauce. The topping is slivered almonds, leeks, dried cranberries and homemade breadcrumbs, and there are three important things to note:

1. it should go without saying, but clean the leeks thoroughly;

2. make sure you sautè the almonds to golden brown or they won’t have the awesome crunchiness that makes the dish so splendid; and

3. toast your own breadcrumbs! It takes five seconds to scoop out a loaf into a food pro, and 10-15 minutes in the oven to get ’em toasty-but it makes the biggest difference in the world. Canned breadcrumbs add an unappealing grittiness to the topping, so don’t be tempted to cut that corner. I used sourdough last night, but you can use anything you have around; even Wonder bread crumbs would be better than sawdust from a container.

The sauce is a breeze, and the key is to use cracked black pepper-not coarsely ground-even if you have to mortar-and-pestle some whole peppercorns yourself. And use good, real maple syrup for this; if Mrs. Butterworth is offended, she’ll eventually get over it.

As I mentioned, I plate this in the reverse of the recipe: I put the “topping” on the bottom (does that make it the “bottoming?”), then the nice crispy piece of chicken, and a drizzle of sauce. It all mixes together anyway, so I suppose it doesn’t make that much difference in the end.

The perpetually-hungry Reiser Boyz devoured this yummy dish, and one actually proclaimed it the best chicken dish in the history of chicken dishes. That’s pretty high praise, if you ask me!

From The Elements of Taste, © 2001 by Peter Kaminsky and Gray Kunz

Melt the butter in a medium saucepan over medium-high heat. Add the shallots and cook, stirring occasionally until they are soft and translucent. Add the pepper and nutmeg. Add the vinegar, bring to a boil, then add the maple syrup. Return the sauce to a boil and reduce by half. Set aside.

Preheat the oven to 500 degrees. Make an incision in each of the chicken’s thighs, then tuck in the legs. Season the chicken on both sides with salt and pepper. Heat the oil in a large heavy ovenproof skillet over high heat. Place the chicken, skin side down, in the hot pan then immediately transfer it to the oven. After 10 minutes, flip the chicken. Continue roasting, basting every so often, until the thigh juices run clear, 25-30 minutes total roasting. Remove the chicken from the skillet and allow it to rest for about 10 minutes. Pour the fat from the roasting pan and deglaze over medium low with the Maple Vinegar Sauce. Cook just until the sauce pulls together, less than a minute, then set aside in a warm place.

Combine the almonds and butter in a small skillet. Heat over medium-high heat and cook, turning the almonds frequently, until they are golden brown. Add the cranberries and leeks. Continue pan-roasting for 1 minute. Add the bread crumbs and season with salt and pepper.

Plating: Cut the chicken in serving size parts. Arrange the chicken on warm plates. Spoon first sauce, then topping, over the chicken and serve.

One Response to “Oven-Crisped Chicken with Maple Vinegar Sauce”