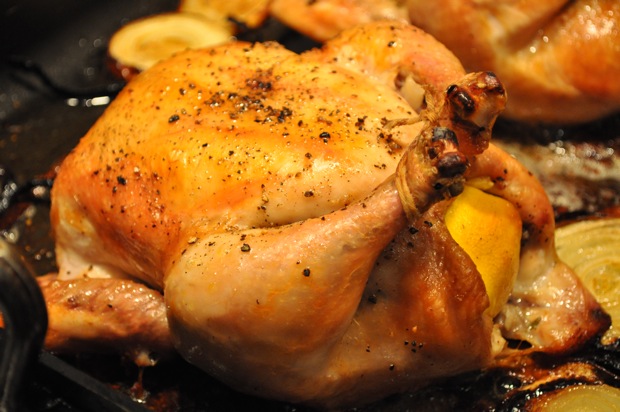 Okay, besides my dad and my darling friend, John, raise your hand if you don’t like a perfectly roasted chicken.

Yeah. That’s what I thought.

There aren’t many more satisfying simple pleasures than roast chicken ““ with its crackly, golden skin and velvety, savory meat. I’ve been a sucker for a good roasted bird since I was a young girl, when my favorite dinner was a Purdue oven stuffer roaster with Croutettes stuffing. The thought of either one of those ingredients now makes me slightly queasy, but oh, how I used to look forward to the occasional Monday night, when my dad would be off at a Propeller Club meeting and my mom would take advantage of his professed apathy for poultry.

To me, chicken = love. It’s always served in some form at holiday dinners, family dinners, and we even served a fancy version at our wedding ““ of course being Andrea and David, we provided Michel Richard’s Tangy Chicken with Shiitake Crust recipe adapted for the New York Times to our caterer, Guy, who did a stellar job. And there is truly no food more soulful than homemade chicken soup. No matter what recipe they use, if someone makes you chicken soup, they genuinely care about you.

I started my obsession with roasted chicken sometime in the mid-90s, with the widespread availability of Bell & Evans free-range birdies. I think I tried any recipe in existence that promised crispy skin and moist meat, searching for the epiphany that would provide consistent, foolproof results. I finally stumbled onto a recipe that I’ve long since forgotten the source of, which recommended starting the chicken at 500 ° and then reducing the temp to 425 ° after a time. Every time I opened the oven at the end of cooking, lo and behold was this exceedingly gorgeous chicken.

Once I got the technique down, I started experimenting with other brands of chicken (D’Artagnan, Murray’s) . I almost never order chicken in a restaurant for two reasons: 1) it’s so easy to cook at home, I’d rather order something more complicated; and 2) I’m a little squeamish when it comes to trusting food safety guidelines unless I cook it myself. But I made an exception years back at an earlier iteration of one of David Bouley’s restaurants, and it was the most scrumptious chicken I ever had. I found out the organic bird was from Eberly poultry in Pennsylvania, and that set me on my quest to get ahold of these chickens. I scored a source, and soon I was making these luscious chickens in my own kitchen.

Ultimately I started varying the stuff I stuck inside the cavity of the bird, and under the skin. Lemon, thyme, tarragon, garlic, onions, compound butters…over the last 10 years I’ve veered frighteningly far from that original, foolproof recipe. (In fact two of our family faves are the Zuni Cafè Roasted Chicken & Bread Salad, and Gray Kunz’s Oven-Crisped Chicken with Maple Vinegar Sauce.)

I thought this project was a good excuse to try Ina’s basic recipe from her first book. Zack, who’s emerging as a passionate, talented chef, and I made two smallish chickens together, and they were splendid. You stuff the chicken with a halved lemon, a sliced garlic bulb and some thyme, then paint it with melted butter. Sliced onions also go into the pan-not for eating, but rather to flavor the easy pan gravy you make while the chicken is resting. We used D’Artagnan birds, and the meat ended up succulent and well-flavored from the goodies we had stuck inside the cavity. The skin had been seasoned well with salt and pepper, and it was quite tasty, albeit not mindbogglingly crunchy. I think I’ll try my 500 ° oven trick for the first part of cooking next time to see if I can get the skin to crisp up a bit more. The sauce was rich from the fond, and had a distinct oniony flavor, enhancing the soft, moist chicken. Zack got a great lesson in the cleaning and safe handling of poultry, and learned the secret that it’s pretty easy to roast an impressive bird.

If there’s chicken on your horizon for the Jewish holidays, my friends, I hope you enjoy it with those you adore. From our kitchen to yours: wishing you and your family a sweet New Year filled with joy, love and good health.